To those who wait,

I live my life in quiet, or I strive to.  Though in my quiet, here is waiting, anticipation and… much restlessness.

While I wait, I wrestle.  Part of the waiting is a stream of doing too.  Waiting for me is not idle.  It is active.

What am I waiting for?  Many things.  For my eyes to one day behold what I hope for, faith becoming sight.  For perfection.  For joy on this earth.  For promises to become realities.  Many things.

In my restlessness, two years ago I sold most of my earthly possessions, and packed my tiny two-door car with whatever would fit and moved to Dallas, Texas to attend Seminary.  My life will never be the same since that day.  I can’t explain it, but my two years here have been like a gentle breeze, making its way through the empty spaces of my heart… awaking many things in me by the means of the Holy Spirit.

This past week was one of those gentle breezes, only it was more like a powerful wind, studying grace and salvation in a one week intensive course.

There are many people to whom I have much gratitude to give, and Dr. Glenn Kreider is one of those people.  Thank you Dr. Kreider for your sacrifice of this past week, and your life given to teaching students at Dallas Theological Seminary.

I cannot sum up this week in a simple blog post, or even many blog posts.  It is just not possible.  But as I sort out these things and work out my own salvation, some of those “working outs” may appear here on my blog, to those who read, and to those who wait (for the posts.. sorry!  I’m slow..)

To those who wait, and to myself, as one who waits: do not stop waiting.  Live in the tension of that which is now, and the hope of that which is promised.  It has to be worth it, because there really isn’t much else to hold on to as I look around at this ever changing world we live in.

There are many things in life I am not sure about in life, but I am sure that I am desperate for God’s grace.  And I am also sure that I know I’ve never deserved that Grace, and I never will.

The scene was not uncommon in the Gospels: Jesus teaching.  The audience also not uncommon: the twelve disciples, various other followers, and the skeptics: the religious teachers of the law.

I always image the religious teachers standing with their arms crossed in the back of the crowd whenever Jesus taught.  Yet still hanging on to every word Jesus said, to judge and find fault with him, or perhaps on the verge of believing he was more than just a teacher or prophet.

Then, a woman was “placed” before Jesus.  This woman, they said was caught in the very act of adultery.  “Such women” were to be stoned.

What say you Jesus?

The crowd eagerly listened.  Perhaps Mothers with young children scurried back to their homes, offended to be in the presence of this woman.  I always imagine her wrapped in a sheet.  However this woman was presented, I’m sure her face wasn’t unknown to those in the crowd.  They knew her, at least her reputation.  And now this reputation was confirmed as she knelt on the ground, weeping tears from the depths of her heart and soul.  Her sin was now exposed.

[Too bad the religious leaders were more concerned with what Jesus was about to say or do, and not this woman herself.]

The Old Testament was serious about sin.  Well, God is serious about sin, but read Leviticus for a new view.  It will bring perspective to the demands a Holy God.  He expected holiness from His people.  God’s wrath and jealousy for his people was that they have devotion to only Him, and that their actions reflect this devotion.

The religious leaders knew the Old Testament like the back of their hands.

“If a man commits adultery with the wife of his neighbor, both the adulterer and the adulteress shall surely be put to death.” Leviticus 20:10

“And I will judge you as women who commit adultery and shed blood are judged, and bring upon you the blood of wrath and jealousy. And I will give you into their hands, and they shall throw down your vaulted chamber and break down your lofty places. They shall strip you of your clothes and take your beautiful jewels and leave you naked and bare. They shall bring up a crowd against you, and they shall stone you and cut you to pieces with their swords.” Ezekiel 16:38-40

Yet this picture in John 8 paints a different picture of God.

(AND, side note = where was the man she had been sleeping with?  The law also says he was to be killed too, but for some reason they only felt the need to condemn her.  Interesting.)

Next, Jesus writes in the sand.  Bible scholars have their own speculations on what he wrote, but truthfully, we really don’t know what it was.

Jesus then said: “Let him who is without sin among you be the first to throw a stone at her.”

[Scribbles in the sand again.] 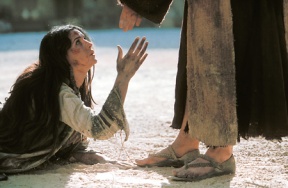 And one by one, they all walked away.
Every.
Single.
One.

No one condemned her.
No one could condemn her.
Not even the sin-less Jesus Christ, who knelt down next to her.

Friends, there is much to be said about these short 11 verses.  But tonight, I will not begin to say it.

We all are sinners in desperate need of God’s grace.  Good thing for us: God is in no short supply of grace.  He has lavished it upon us in ways we may never know. 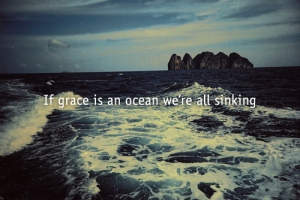 Each day, I find myself surrounded by holy moments.  Not because I work at a church.  Actually I think that’s the opposite reason I experience these moments.  It’s in working out things.  Talking to people.  Expressing pain.  Expressing beauty.  Expressing love, care and concern in whatever way I can.

I love passing along verses to people.  Especially lately verses that have been so convicting in my own heart and life, I just know I have to share them with others because they’ve impacted me so greatly.  I don’t do it to tell them they need to change, I just throw it out there, because I know it’s changed me.

I experience God in many ways, one of them is in running.  Another is in creation and the beauty of all that is around me.  And another, just as of lately, has been in people.  Now I don’t consider myself a total “people person”, but lately there have been many precious conversations that have caused me to just gently be reminded that God is here.  With me.  Holding my hand.  Wiping my tears. Giving me dreams again.  He’s here.  He uses other people to sometimes show me things I’ve never thought of before.

Lately I’ve been taking prayer walks.  During the day, especially since it’s been so nice lately.  Walking around the apartments near the church and just praying fervently.  That our church would learn and see how to have compassion and love for these people… these broken people who are so different from us.  Who live with their boyfriends or girlfriends, who have many children.  Who have many tattoos.  Who smell bad.  Who cuss us out.  Who want nothing to do with church.  GOD… how can we love these people????  Our church has been put in this location for a reason.  Why are we not broken over wanting to see these people in church and praying for their salvation?

Met with a friend yesterday who goes with a group of people to narcotics anonymous weekly.  She said that meeting is more spiritual to her than any other church service she’s been to.  Because it’s real.

They are all around us.

In a smile, a warm touch, a friend, an enemy, in working through our bitterness. 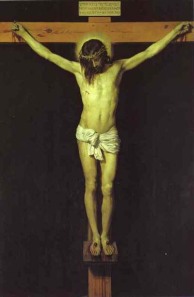 Lent has been different this year for me.  Not as intentional as I’ve been in the past.  Honestly, I tried to give up facebook for the entire 46 days, just to have some extra focus.  Then it turned into just checking it if I needed to, and then just not wasting my time on there.

There are more important things going on around in the world than what your friends are saying on facebook.  That’s for sure.  I value my friends greatly, but more importantly, I value my REAL friends, the ones who are in my life and who pursue me as a friend, and that usually is distinct from facebook.

This week is interesting, because it’s so full of the ancient, but also the new.  This goes in the realm of good, and of evil.  It seems the deceiver works extra hard these leading up to Easter days too.  Thinking he still has victory, somehow, someway.

But we have the victory.

I’ve often thought about this, but I wondered, why is it that I’ve come to embrace and love the cross so much more as I’ve grown older?  The answer is simple: because I know I need it.  When I was younger, I didn’t see my need for it.  I was “good enough”.  I didn’t really do anything that bad.  But now I know.

Now I know I’m lost without the cross. Without the sacrifice.

This morning I read Matthew’s account of the crucifixion.  And cried.  Matthew 27.  Just the thought of Jesus bearing all the sin of the whole world on his shoulders still makes me weep.  I’m not being overly spiritual here.  Think about it.  The weight of everything we’ve ever done or will do weighing on him.  Pulling down on perfection.  White becoming black with no reason, no cause. Just love.

Why do we still slap him in the face and hurl insults at him today?  We do this through our actions and thoughts.  Every moment.  We are non-holy beings.  How could we ever deserve to be called holy?  Righteous?  Loved?

I plead with you my friends, can we strive to seek him?  Serve him?  Turn away from darkness into light?

3 He was despised and rejected—
a man of sorrows, acquainted with deepest grief.
We turned our backs on him and looked the other way.
He was despised, and we did not care.

4 Yet it was our weaknesses he carried;
it was our sorrows that weighed him down.
And we thought his troubles were a punishment from God,
a punishment for his own sins!
5 But he was pierced for our rebellion,
crushed for our sins.
He was beaten so we could be whole.
He was whipped so we could be healed.
6 All of us, like sheep, have strayed away.
We have left God’s paths to follow our own.
Yet the Lord laid on him
the sins of us all.

I just love this song… the picture of being so close to the cross, and really understanding the meaning of Christ’s sacrifice for us on the cross.  I especially think more about the cross as we approach Thanksgiving, and of course Christmas.

We have so much to be thankful for, I’m amazed at his mercy and grace, new every morning.

Sweet the moments, rich in blessing
Which before the cross I spend
Life and health and peace possessing
From the sinners only Friend